On the 3rd floor, we take you straight to the ocean, its impressive reefs and inhabitants – there is a lot to discover!

As soon as you step onto this level, you can hear the sound of the ocean: the surf reef shows the environment in which countless colourful tropical fish cavort among corals. A sophisticated speaker system makes it possible to experience the sound of the waves. Thanks to a half tunnel – created by a curved pane – you are right in the middle of the action! You can observe the reef dwellers from below through “diving helmets“, two glass domes built into the aquarium floor. In the background there is special lighting tailored to the specific needs of corals.

On the left side of the floor, you will find tropical marine life: newly opened in 2019, this section is made up of 14 interconnected aquariums, ranging from 200 to 25,000 liters, dedicated to different biotopes and themes. The largest provides an all-round view of an artificial coral reef almost 3 meters deep. It is inhabited by reef fish such as Napoleon wrasse, bluespotted stingray, fusiliers, bluestriped snapper and unicorn surgeonfish. But the star is most probably baby reef shark Jacek. He is the first offspring of our blacktip reef sharks, which we are proud to present to the public for the first time due to the rarity of such successful breeding.

Next up are two wide console aquariums with sloping front windows, through which one can observe the seabed of a mangrove forest and a coral reef. Often-overlooked animals live on these sandy bottoms, such as the upside-down jellyfish of the mangroves, batfish, lumpfish, dragonet and cracker shrimp with their symbiotic partner gobies. The little crab digs the common burrow in the sand while the goby keeps watch. In case of danger, they flee together into the protective retreat. Other tanks are dedicated to poisonous fish, crabs, moray eels, mantis shrimps and other symbioses and show stone fish, lobster, zebra moray eels, clown fish, and an octopus.

On the right-hand side of this level, you can immerse yourself in the colourful world of coral fish: coral reefs offer a richer variety of fish than any other habitat on earth. Reef-building corals only exist in warm seas, which means that the distribution of coral reefs is limited to a narrow zone on both sides of the equator, where the water temperature never drops below 20 °C. These reefs are created by coral polyps – tiny anthozoa with a very simple anatomy: a ring of tentacles surrounds a sac-shaped, hollow body; these individual animals excrete a calcareous skeleton. A coral stock often consists of thousands of polyps and grows only a few centimeters per year. Several centuries and many animal species are necessary for the formation of a reef. If you take a closer look at the crustacean anemones, which belong to the Anthozoa, you can recognize the individual animals – the polyps look like small flowers due to the short tentacles covered with poisonous stinging cells.

The names of fish usually bear semblance to their appearance or to the biology of these animals. Butterfly fish are reminiscent of colourful butterflies due to their blaze of colour. Boxfish are similar to their namesakes due to their square shape. The clownfish, which have gained popularity thanks to the movie “Finding Nemo”, have formed a symbiosis with cnidarian anemones in the course of evolution. The layer of mucus that sticks to the fish prevents the anemone from ejecting its stinging capsules and causing burns. These anemonefishes find perfect protection from enemies among their tentacles. Any predator who pursues them in the anemone would get stung inside the cnidarian. But the anemone also benefits from its inhabitant, which defends its cnidarian against predators such as the butterflyfish. Also seen on the 3rd floor are surgeonfish, so named for two scalpel-like appendages used in intraspecific fights. Triggerfish have a specially shaped first dorsal fin, the so-called trigger. It consists of very thick fin rays and is used for jamming in holes. This makes it impossible for enemies to pull them from their lairs. Arguably the most venomous sea creatures are the lionfish: vividly coloured and venomous, the Pacific lionfish is a master of camouflage and an excellent hunter, its long feathery pectoral fins helping it to corner its prey.

back to Floor 2
to Floormap
forward to Floor 4 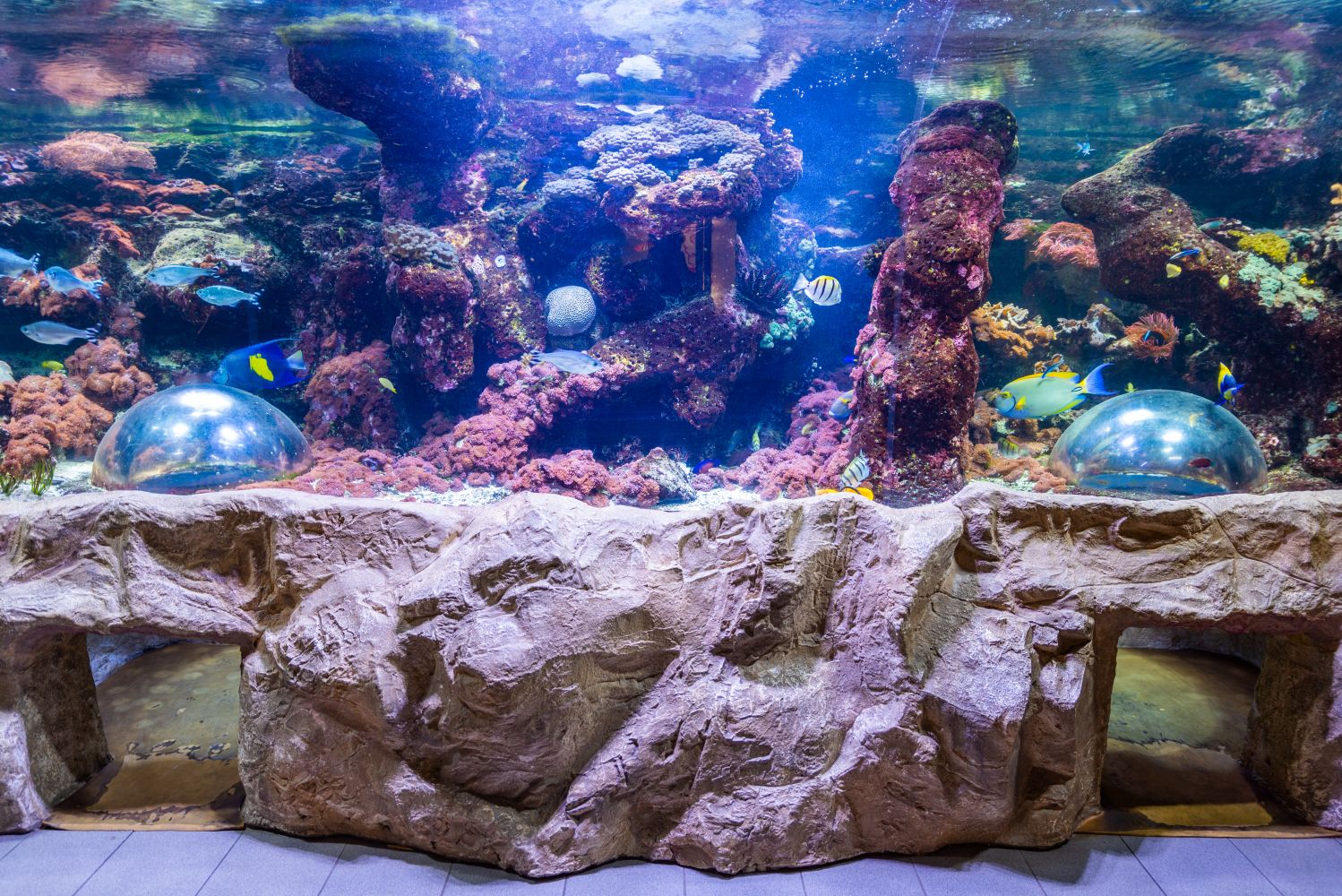 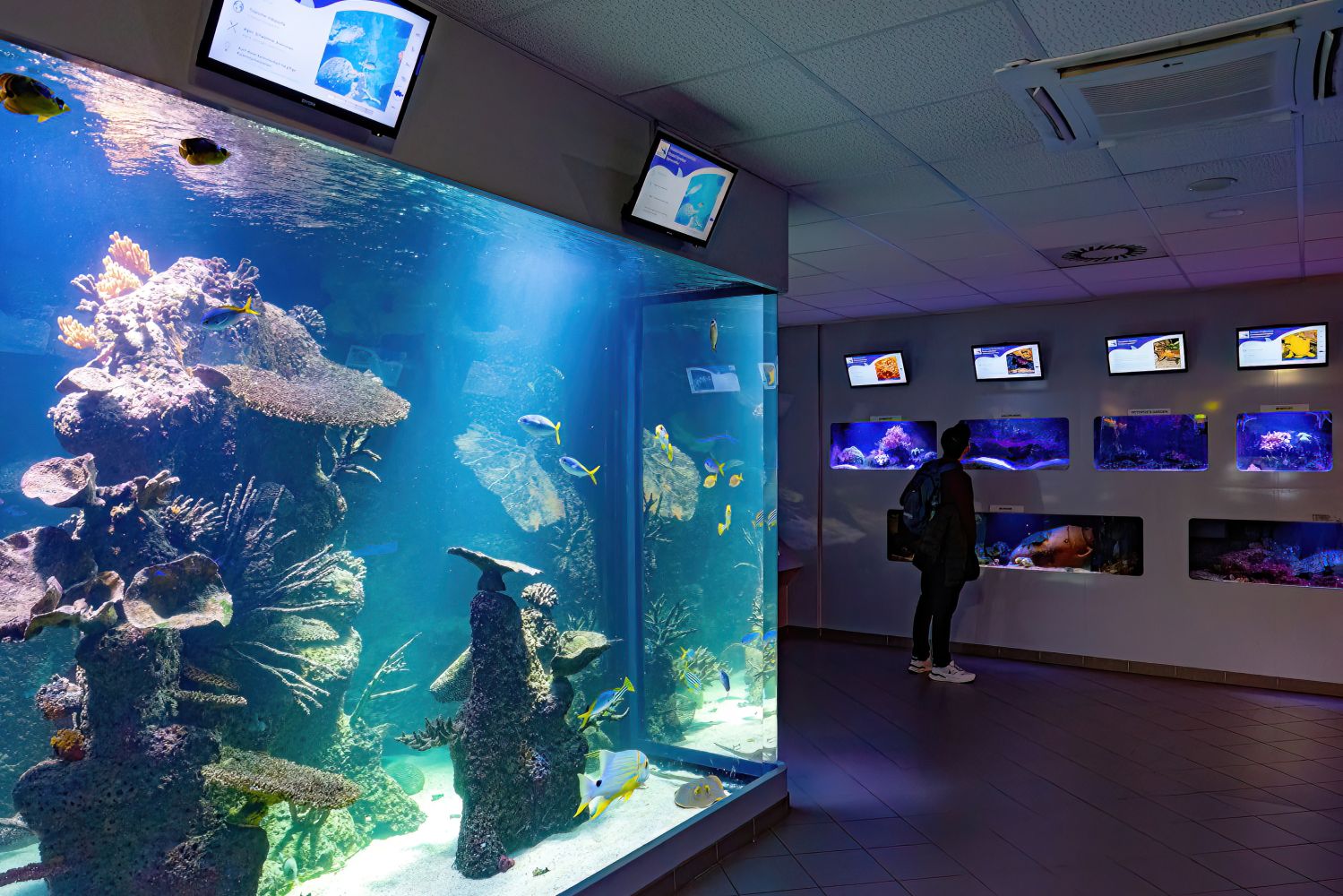 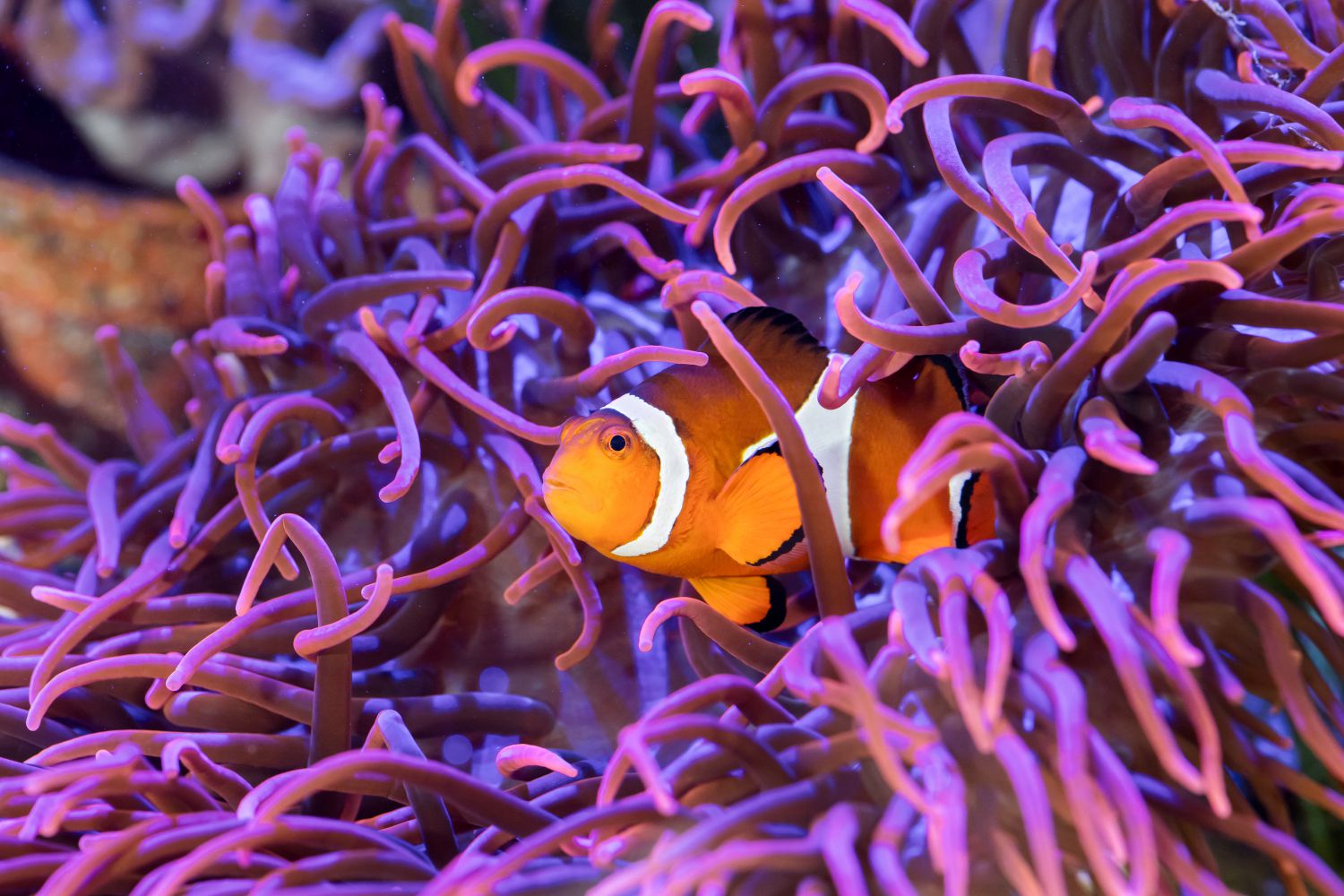