Look forward to many different animal areas on the 7th floor!

You can find our New Guinea paludarium a bit hidden away right next to the stairs: This facility shows a jungle section of a rain forest area in New Guinea; a paludarium is a mixture between an aquarium and a terrarium. The land part is inhabited by tree pythons – those giant snakes that are beautifully green in color and usually can be seen resting on the branches, all curled up in their typical position. They live almost exclusively in trees and shrubs. The water part is home to the so-called rainbow fish. These brightly colored animals come from the same area and are extremely popular aquarium fish because of their rich colors. Both animal species in combination add an exotic touch of New Guinea to the Haus des Meeres.

Let us move on to our desert terrarium: This is where Gila monsters live. These reptiles originate from the Sonoran Desert in the USA and Mexico. They survive the hot part of the day in caves they dig themselves into and only come to the surface at dusk to track down their prey with the help of their excellent sense of smell. The thick tail serves as a fat reserve. The Gila monster is threatened with extinction in its homeland. Next up is the Komodo dragon: these beaded lizards are the only venomous lizards among the reptiles. The toxin is produced in the sublip glands and reaches the victim’s wound through grooves in their strong teeth. The Komodo dragon’s toxin, known as gilatoxin, causes symptoms in humans such as severe pain, swelling, nausea, and heart and circulatory problems. One of the components of gilatoxin is used to successfully treat diabetes. The Colorado River toad is another highlight in our desert terrarium. This toad is known to secrete toxins through its glands to ward off enemies.

The striking basin that you will see next is our Pacific Eye: it shows a section of the brown kelp forest, an ecosystem found on a few seacoasts such as those of California, Western Australia and Southwest Africa – often referred to as a "kelp forest". Cold sea currents, which only prevail on the west coasts of the continents, supply these brown algae with a special fertilizer that comes from the deep sea. This special ecosystem allows these gigantic species with record heights of 45 metres and growth rates of 50 cm per day to exist. The kelp forest ecosystem bears similarities to forests on land: some species of algae form the shrub layer we are familiar with, while others grow rapidly upwards, creating a canopy layer that casts a dusky light on the ground. The unique shape of the tank enables a detailed view of the animal world with swell sharks, Californian bullhead sharks, grunt fish, perch and creole fish through the curvature of the "lens".

Do not miss this! A walkway takes you to the new extension to one of our latest highlights: the 360° shark tank. The oval pool is the largest in terms of surface area in the Haus des Meeres, filling almost 120 m²! One can walk all around the tank (hence the name 360°) since it offers insights from all angles – the first such pool in our zoo! The shark aquarium is a replica of an Indo-Pacific coral reef: The stars are the two migrated shark species (whitetip and blacktip reef shark) but also the ray species closely related to the sharks. Keep a lookout for the blue-spotted masked ray or guitar ray. Four species of surgeonfish maintain the ecological balance of the new aquarium by grazing the rapidly growing diatom algae. In addition, many hundreds of damselfish and other coral fish use the countless cavities of the artificial reef as hiding places. Cleaner wrasses remove impurities from fish bodies, even from rays and sharks that are rarely ready to be cleaned. A total of more than 1,000 fish live in the new aquarium.

back to Floor 6
to Floormap
forward to Floor 8 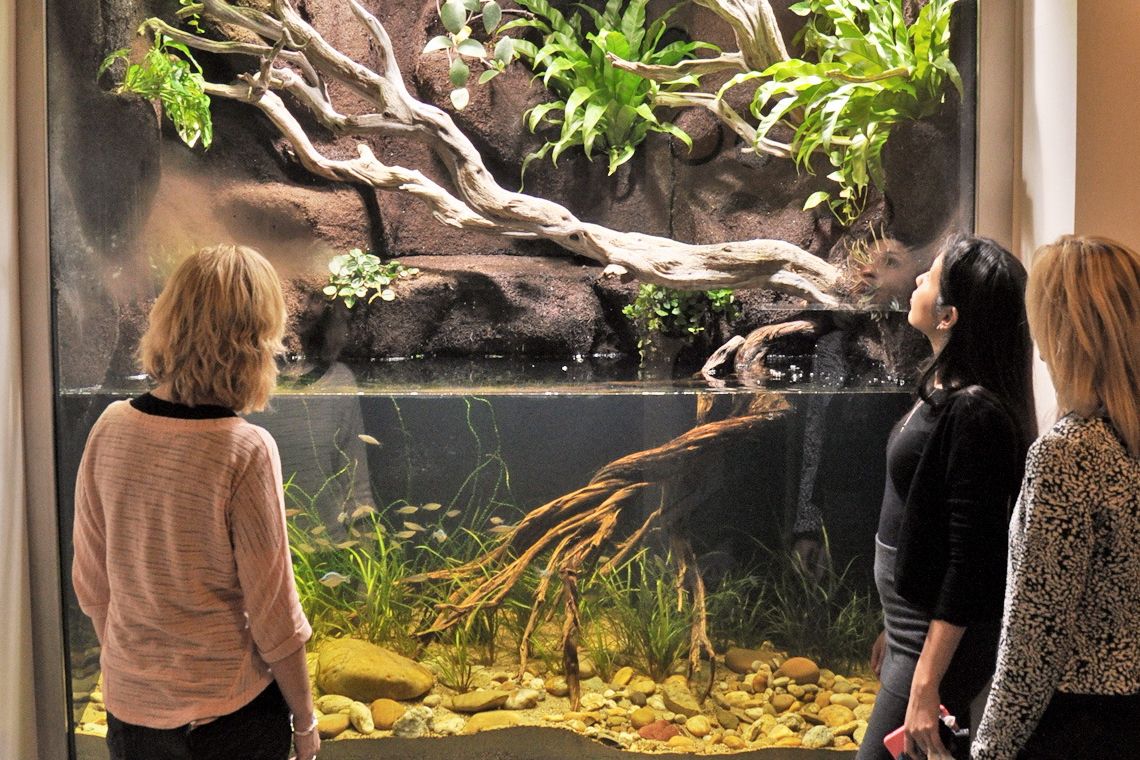 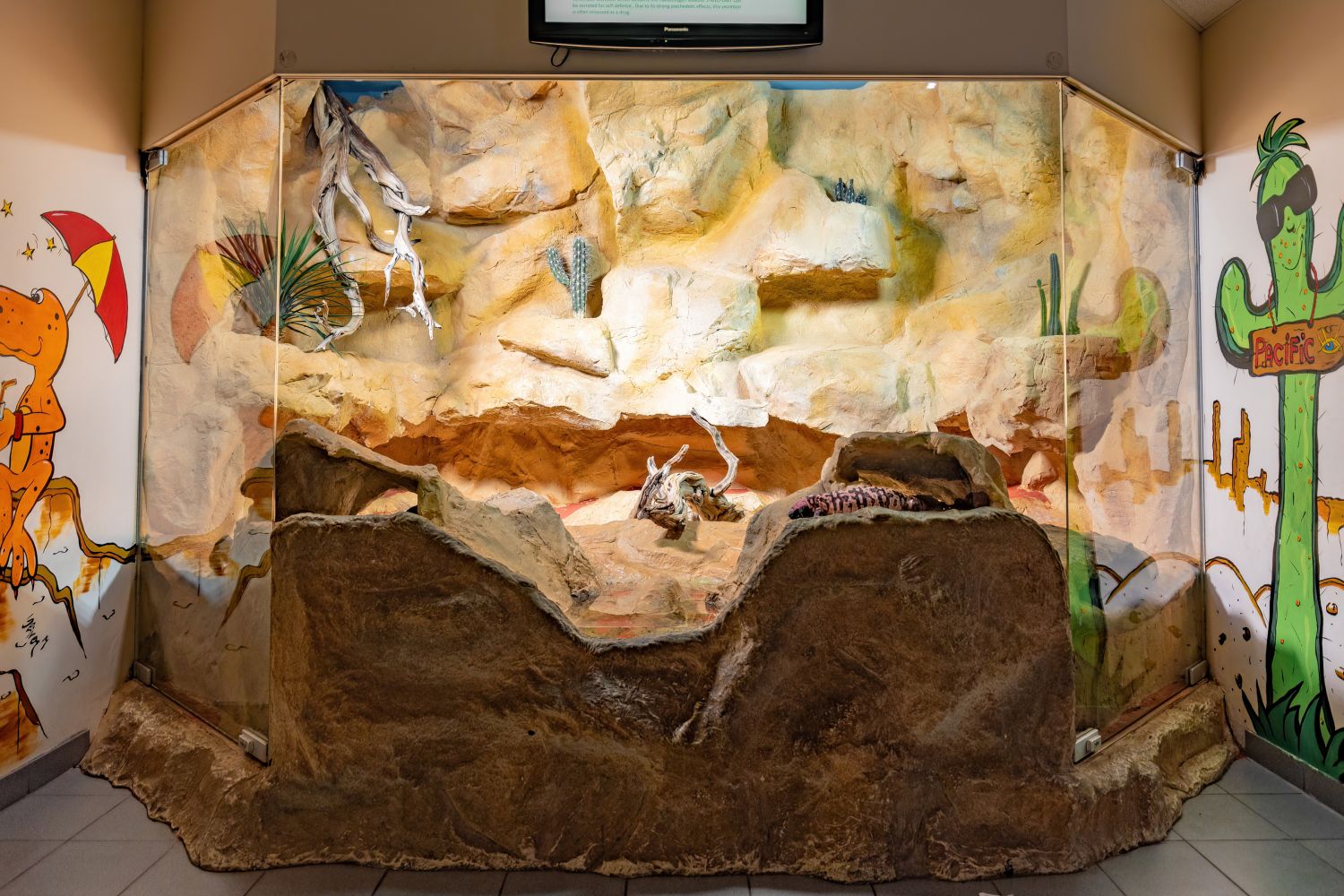 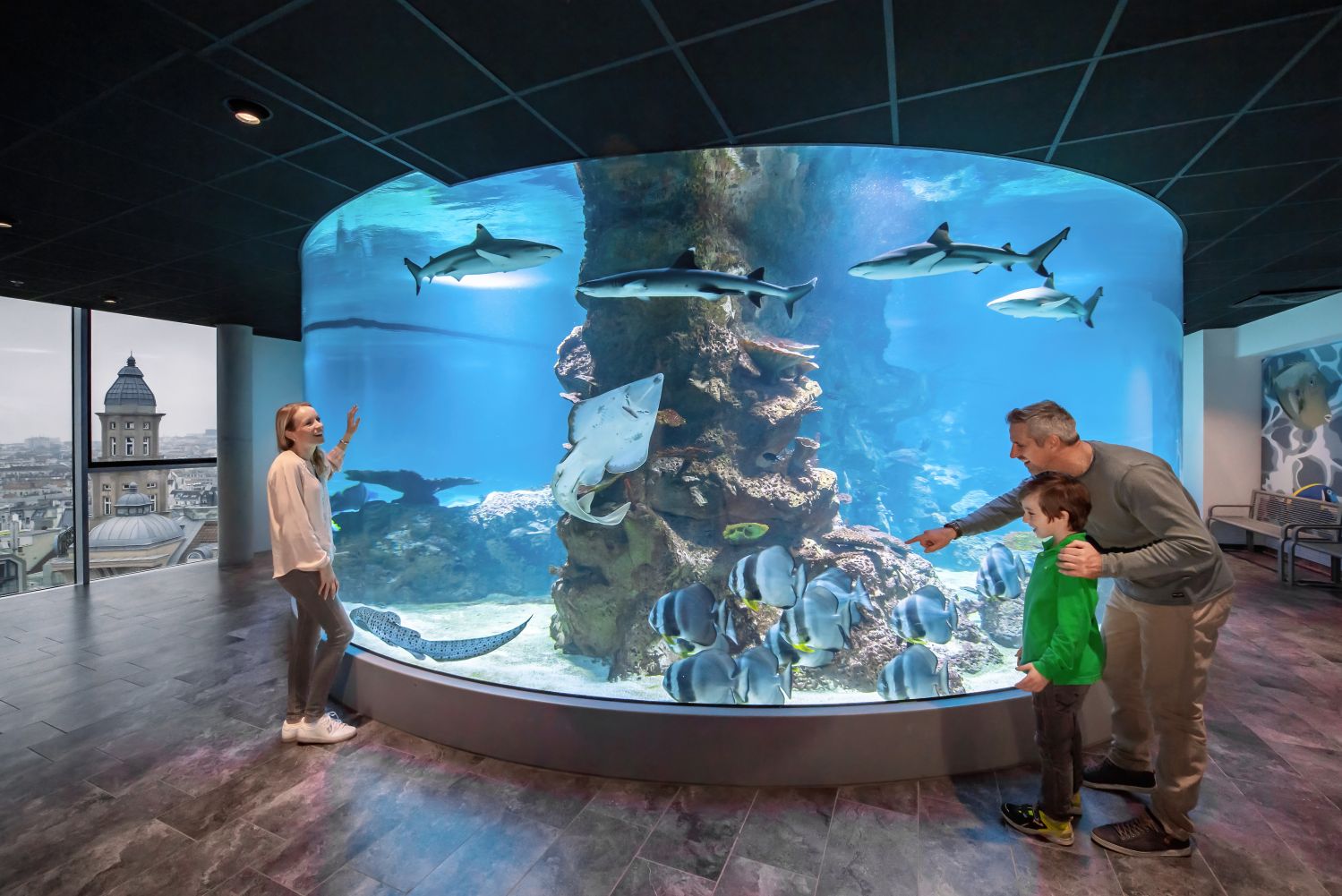