Local fish and the marine conservation exhibition "We and the Sea" ("Wir und das Meer") await you on the 6th floor.

Fish from all parts of the world are presented at the Haus des Meeres, and of course fish from local waters also call the zoo their home. Mainly species that are found in the Danube and its tributaries in the Vienna area are shown. Due to its special geographic location, the Danube is one of the most species-rich rivers in Europe. There are over 60 species of fish in the area of ​​the Donau-Auen National Park, which also includes part of the Vienna Danube. Fish such as barbel and nase, two representatives of the carp family, are the key species in the Danube near Vienna. There has been a massive decline in both types of fish over the last few decades – "the traditional dish "Steckerlfisch" ("stick fish") used to be prepared mainly from these two types because they were so common. However, run-of-river power plants block the former migration routes to the spawning grounds, and river straightening has destroyed almost all flat, current-calmed shore zones.

There are eight representatives of the perch-like fish in Austria. Zingel, Streber, Schrätzer, Danube ruff and the Volga zander are only common in the Danube and its tributaries. The perch, ruff and zander are also native to other waters in Austria. The zander is a predatory fish that can grow to be over one meter long. It is a very efficient hunter in murky waters because its eyes work like residual light intensifiers and register every movement. The male guards the eggs until the fish larvae hatch. Five species of sturgeon were previously found in the Austrian Danube. Except for the sterlet, no other of these species are found in Austria anymore.

Besides catfish, pike and carp are probably the best-known local food fish. While the pike, as a predatory fish, is mainly eaten by fishers, the carp breeds in large ponds and has been doing so practically since Roman times. These fish were introduced from Asia to Central Europe to enrich the menu. In the Middle Ages, the carp played an important role, since fish meat was not considered meat and could therefore be eaten by the Christian population during the Lenten season.

Need a change of perspective? Then follow us to our marine conservation exhibition! When you visit “The sea and us” you can “dive“ deep down into the underwater world: Our marine conservation exhibition deals with marine use and marine pollution. The Haus des Meeres wants to show how much each of us can do to contribute to the protection of the oceans. A big and recurring topic is of course garbage, especially plastic waste. The "garbage vortex" allows you to feel like a fish under a carpet of garbage floating on the ocean’s surface – impressive and oppressive at the same time. Throughout the exhibition, care was taken to use materials that would have accumulated as waste in the course of day-to-day operation at the Haus des Meeres. It is therefore not surprising that recycling and upcycling can be found as important focal points at several stations.

Also on level 6 is the Blauer Kreis (Blue Circle) Nursing Station – a kind of shelter for confiscated and abandoned reptiles.

back to Floor 5
to Floormap
forward to Floor 7 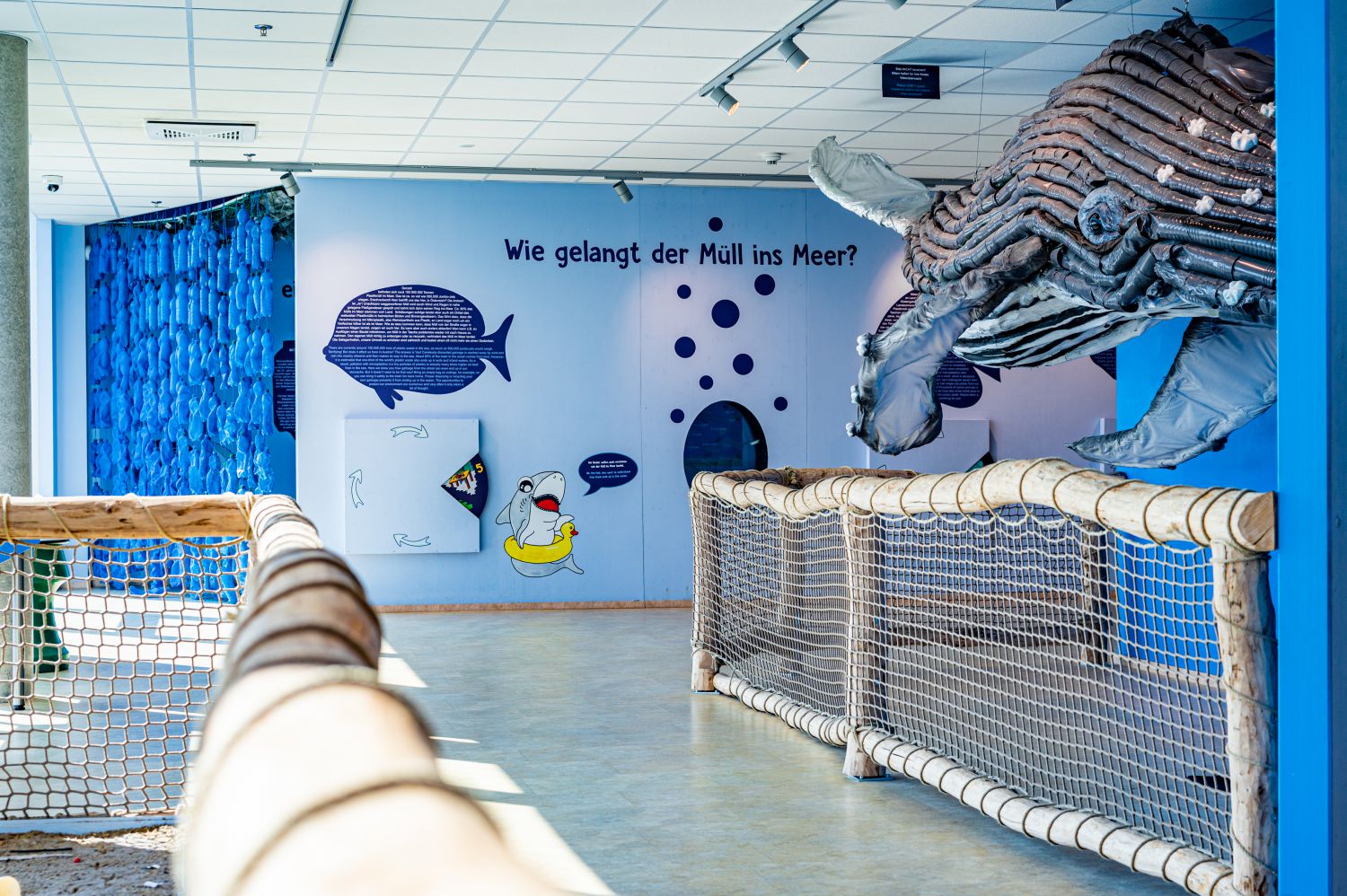