Welcome to the Haus des Meeres! On the following pages we would like to introduce you to our zoo in detail – click through the floor plan and prepare for your visit.

Let us start on the ground floor: Right next to the entrance/shop is our cloakroom with small lockers and a parking space for prams. Once everything is stowed away, you can finally get started: Highlight: the Atlantic Tunnel, which has a capacity of more than half a million litres and extends from the basement to the first floor. A 10-meter long acrylic tube runs right through the pool. The tube showcases the fish world of the Atlantic at the latitudinal range of Europe. Which animal species can be seen here? Two rarely seen dog sharks – although dogs are not usually allowed in. Dog sharks are found almost worldwide in all subtropical seas, grow up to two metres in length and eat mainly fish and squid. Our specimens are named after two famous Viennese dogs – "Pimperl" and “Gaukerl” which were the names of Wolfgang Amadeus Mozart's lap dogs. Other shark species seen in the Atlantic Tube: nurse shark and greater spotted dogfish.

You will also see our cow-nose rays busy swimming around in the tank: These animals owe their name to their broad forehead, which is reminiscent of a cow's nose. When swimming, they flap their pectoral fins like wings. This gives the impression that they are "flying" through the water – just like their relatives, the much larger manta rays. The body-length, rod-shaped tail serves as a sensor antenna and protects the rays from attacks from behind. Cow-nose rays swim most of their lives, only descending to the seabed to feed. There, they crush hard shellfish with their flat grinding teeth. In addition to the cow-nose rays, there are eagle rays to admire: They use their ventral fins to dig pits in the sandy bottom, where they eat small animals living there. to eat small animals living there. The long tail is a tactile antenna directed backwards; the body disc is diamond-shaped with wing-like fins. Mullets, spiny damselfish, mackerel, triggerfish, sea bream, ribbon bream, Mediterranean moray eels, sea ravens and many more also frolic in this large tank!

Once you have completed the tour of the Atlantic, you end up directly at our koi pool: Our touch pool offers you the opportunity to get up close and personal with the fish. Nishikigoi is the Japanese name for the brocade carp, or koi for short. "Koi" simply means carp in Japanese. The fish are known above all for their special colouring and can get quite old: If kept properly, up to 70 years! Our fish are happy to be petted, at certain times they can also be fed.

Somewhat hidden behind are the cold-water fish of the world: Habitats populated by animals that prefer temperature ranges below 18 degrees Celsius ​​exist worldwide and in all climate zones, although they are rarely shown in zoos. In addition to native fish, fish from East Asia are also on display in this section, as well as representatives of a corresponding fauna from South America. There is also an exhibition tank with Mexican highland carp fish.

Directly in front of the staircase is the Australia terrarium, a large terrarium modelled after the Australian outback. This is where the pinecone lizards and frill-necked lizards live: pinecone lizards have a very distinctive appearance; they wear a shell of thick skin scales that cover the whole body like roof tiles – this means they are very well protected from enemies. Their odd body shape also helps to confuse an attacker – the animal looks almost the same front and back due to the thick, short tail. If the pinecone lizard, which belongs to the blue-tongued skinks and can grow up to 40 cm, must defend itself, it opens its large mouth wide and presents its blue tongue as a deterrent.

Frill necked lizards also have a very unusual body shape: they owe their name to their "collar", a large, openable skin seam that nestles against the neck and upper body of the animal when it is at rest. If the frilled lizard, which is almost invisible due to its camouflage colour, feels discovered by an attacker, it spreads its collar in a flash like an umbrella with the help of cartilaginous rods and thus scares off potential attackers. The reddish colour of its "umbrella" and the wide-open mouth give additional emphasis to this creature's frightening appearance. This agama, which grows to around one metre in length, is native to northern Australia and parts of New Guinea.

to Floormap
forward to Floor 1 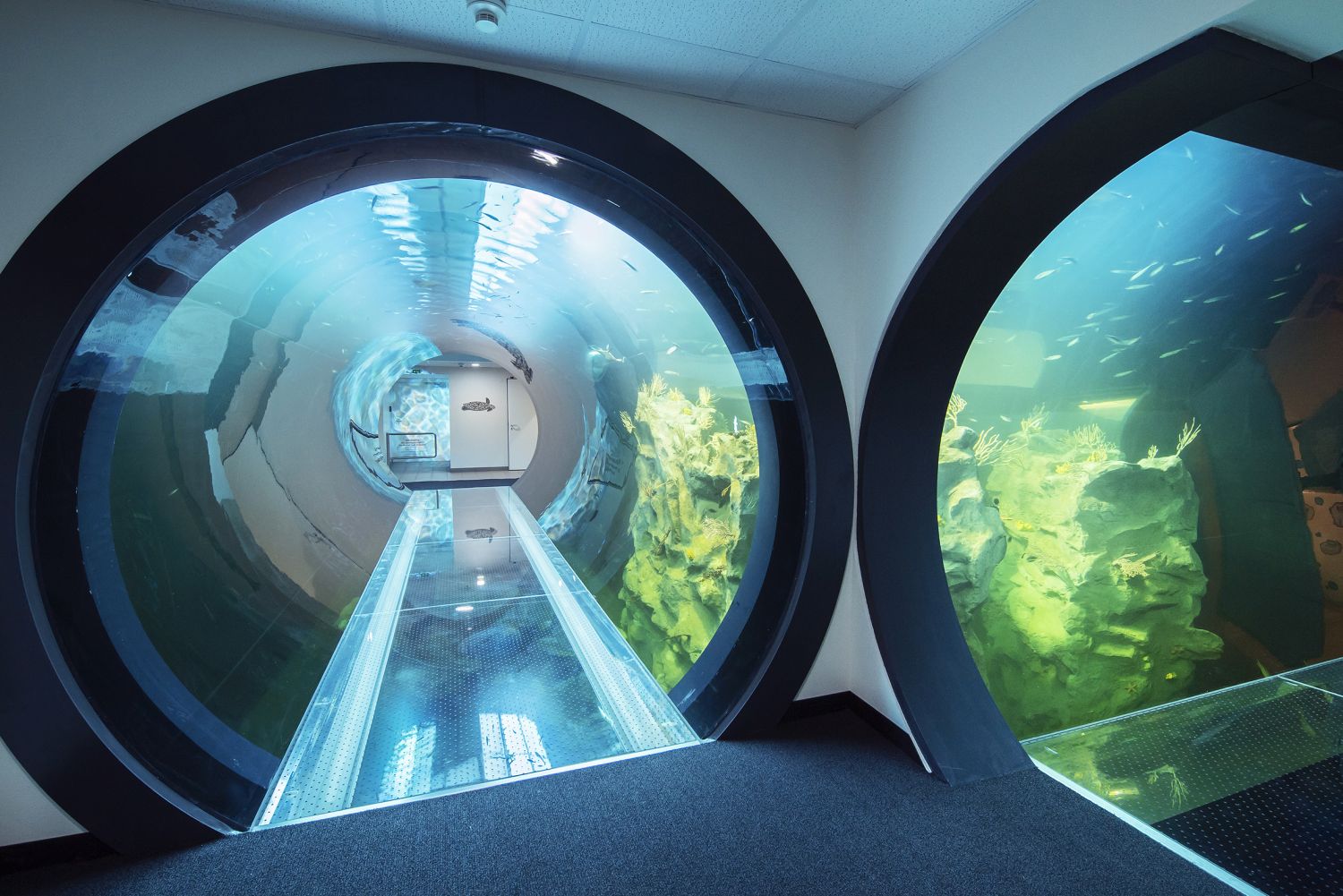 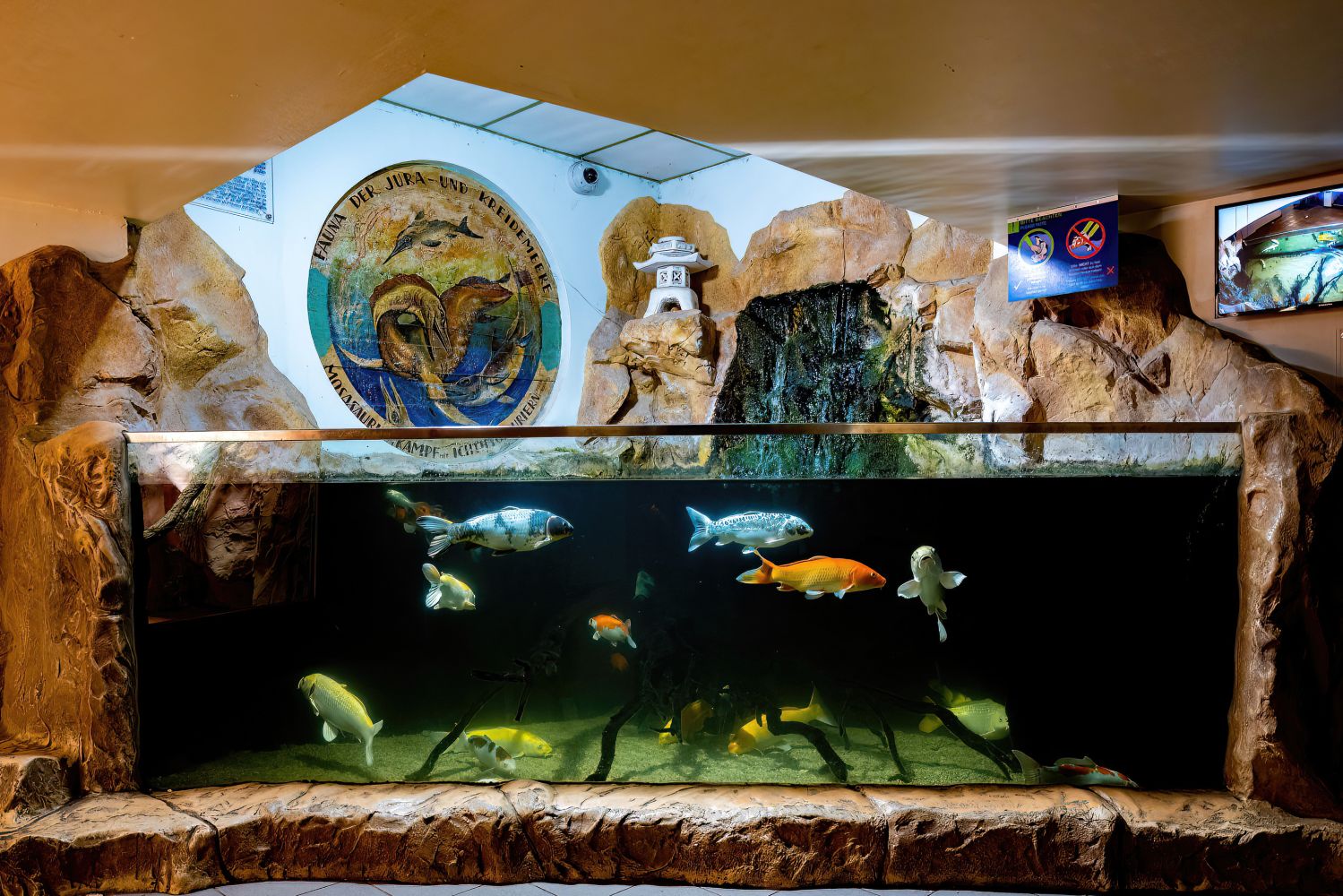 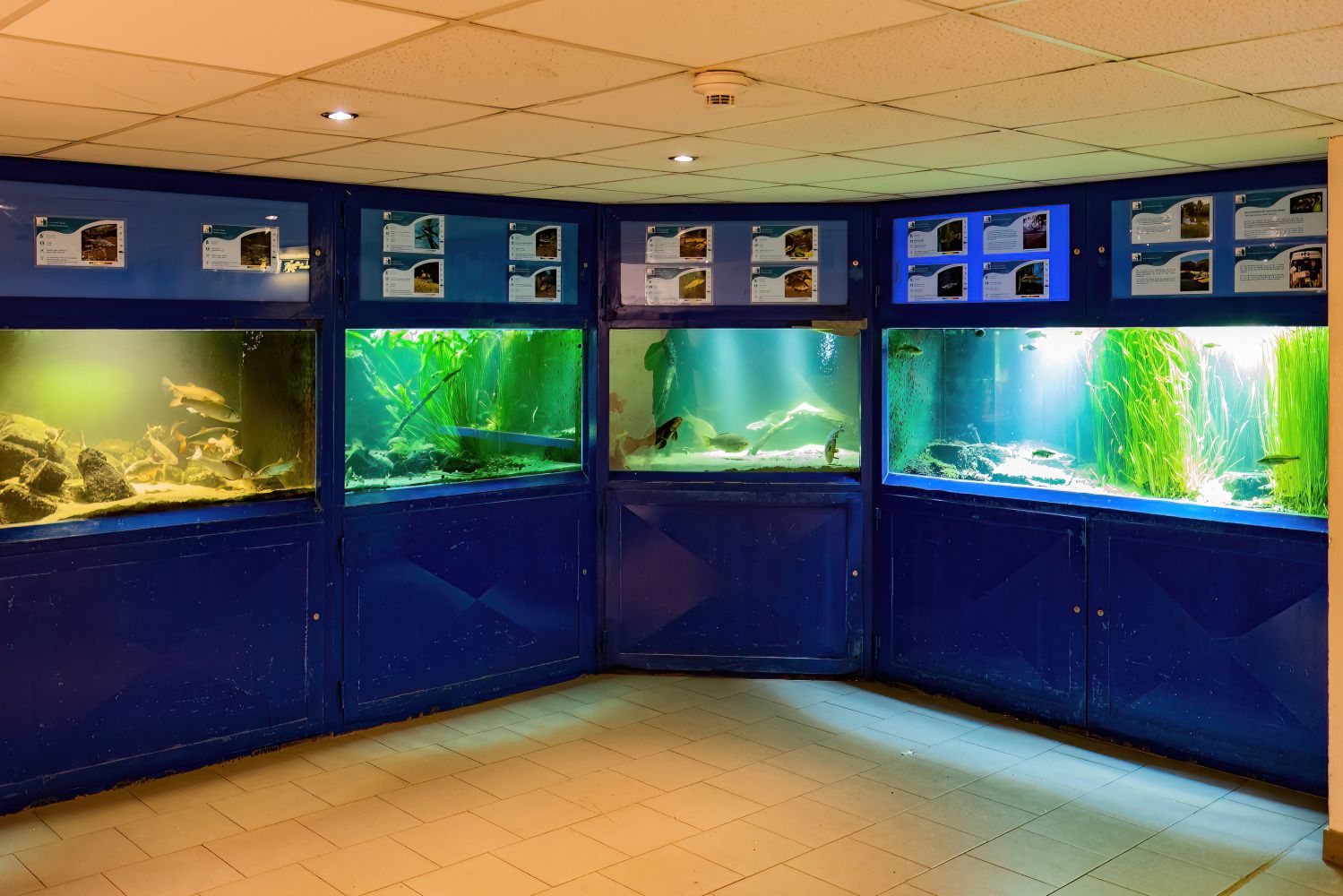 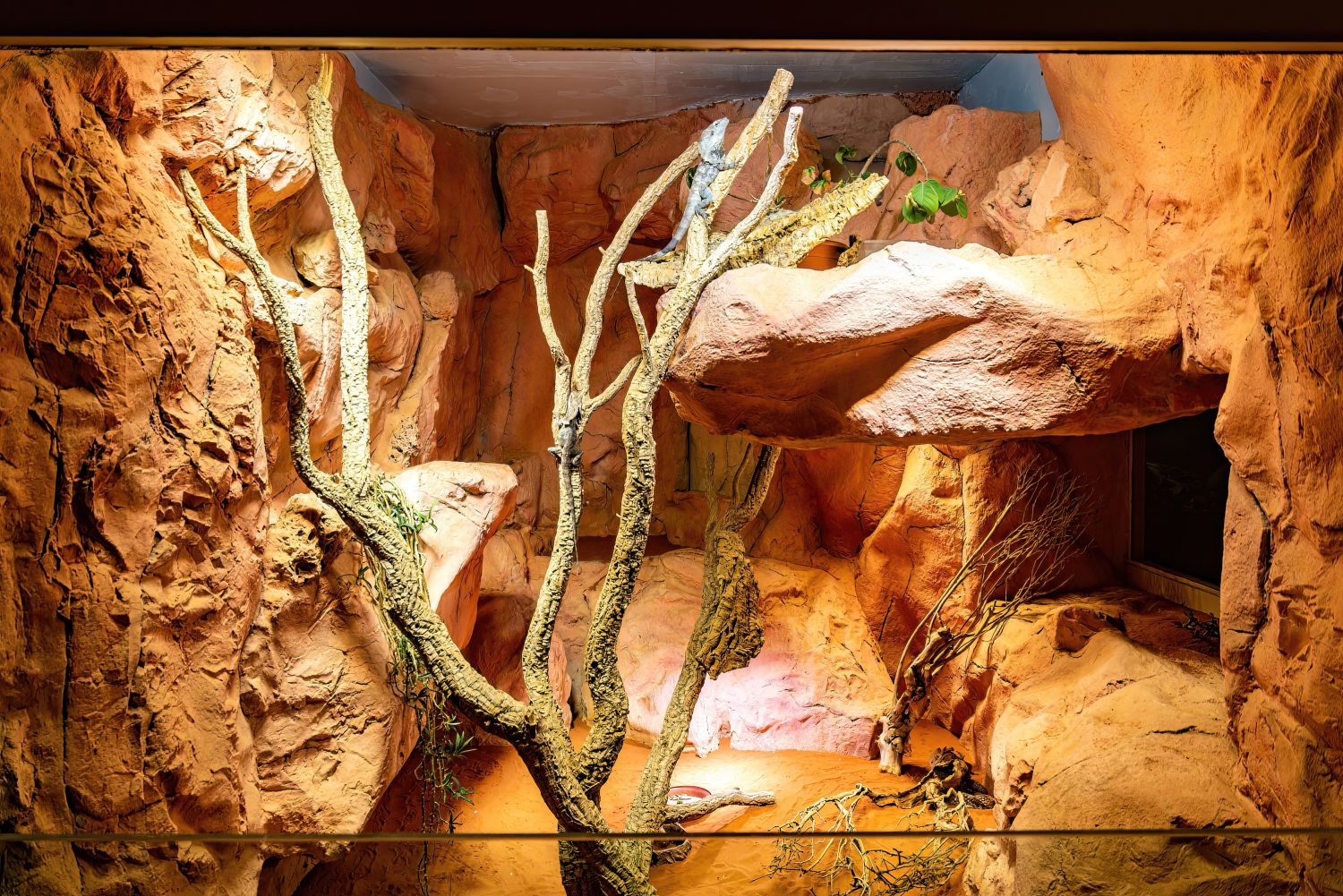